The first was Just Ordinary Men; the second Voices from the Past: Words for Today. Both were written by Dr Anthony Knight.

Jesus was crucified; but what happened next?

through the seven weeks that changed the world. 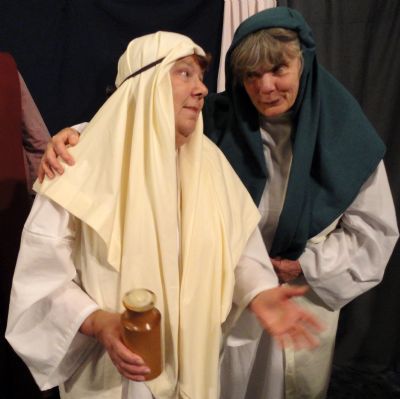 the background and the first performance

After sixteen months of writing, editing and refining, and eight months of rehearsals, the Princes Risborough Baptist Church drama, ‘Just Ordinary Men’ was ready to take to the church stage on Saturday October 29th 2011 .

‘Just Ordinary Men’ is a complex and ambitious – if not epic – piece of theatre to be tackled by a relatively small fellowship of around 70 members, involving a writer/producer and sixteen cast members and drawing in the inevitable back up team for publicity, props, lighting, sound effects and costumes.

Prop manufacture and wardrobe issues involved genuine fishing nets, 153 handmade fish, a realistic non-flammable camp fire, and growing itchy beards (for some cast members!) To say the cast were living by the play by the end is definitely near the truth.

‘Just Ordinary Men’ was inspired by a sermon series derived from the book ‘Twelve Ordinary Men’ by John MacArthur, though not directly based on it. The drama follows the seven traumatic yet amazing weeks in the lives of the disciples, the emotional roller coaster in the immediate aftermath of the crucifixion and subsequent events as related in the Gospels on to the transformation of Pentecost.

As a production, it was no mean feat acting with most if not all the cast present on stage at any one time. The script never includes Jesus himself in person. He remains throughout the key, yet unseen, figure revealed by his absence or disappearances. This ploy, together with a fast moving dialogue which reflects the recently occurred events heightened the emotional tension of the play. The cast maintained a credible ‘suspension of disbelief’, progressively changing to joy, confidence and action as scene followed scene. Throughout the performance the disciples also revealed themselves capable of argument and well-timed humour, which added reality to their ordinariness.

On the night, one hundred and forty visitors and members of the congregation filled the church and its gallery, and followed the fast-paced exchanges of dialogue with rapt attention. The play is solidly based on the biblical accounts and is rich in information and comment. Even for those who are familiar with the plot, ‘Just Ordinary Men’ highlights aspects of experience – and questions – about exactly what happened in those seven world-changing weeks.

The drama drew out some noteworthy characterisation – particularly of the larger than life disciple Peter, and the darker side of doubting Thomas. There was the excitement of the women returning from the empty tomb, and the poignancy of a final scene with the aging apostle John looking back over the mission and ultimate sacrifice of his old friends. Finally came the challenge that we ourselves, ordinary ’tho we too may be, are the inheritors of the task yet to be completed.

We were all drawn into the rolling waves of the hour long production, and enjoyed meeting the costumed performers over refreshments – most finding themselves addressed in role.

Certainly they were ‘Just Ordinary Men’ (and women), but it was also certainly one extraordinary performance.

The substance of this article was reproduced in one of the last editions of The Baptist Times.

Voices from the Past, Words for Today was the focal point of the Thanksgiving and Dedication Service in May 2014 for the Refurbished Church Premises.

Six characters from the church's past 're-appeared' to share the story of God's faithfulness to the church over 300 years. Each concluded with an exhortation for us to show faith and commitment to this faithful God for the present and the future. 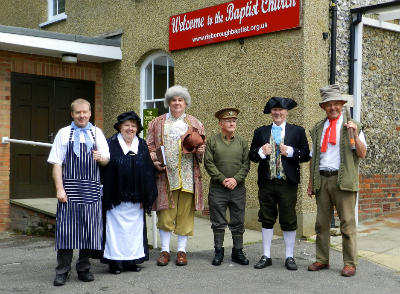 From left to right:

William Cork and his mother, Jane, our earliest benefactors in 1707 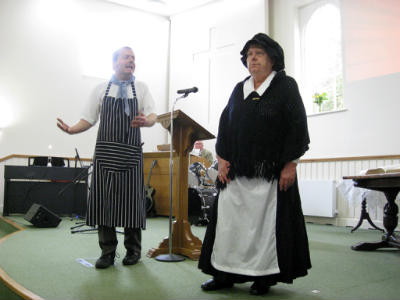 John Webb a church member in 1797 when the church made a new beginning after being closed for a short time. 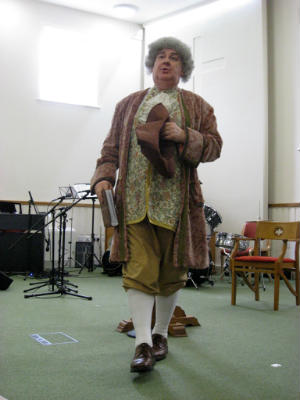 James Crook, killed in action during the Great War and remembered on our Memorial Organ. 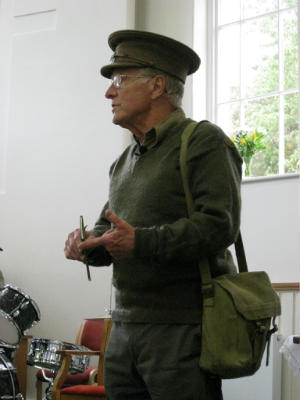 Thomas Cartwright a wealthy paper merchant who was our benefactor in 1745. 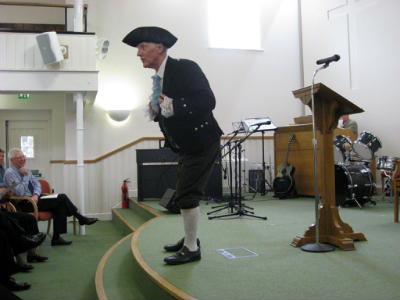 Jethro Diggerswell, a local (fictitious) labourer - but someone must have dug the well in 1707! 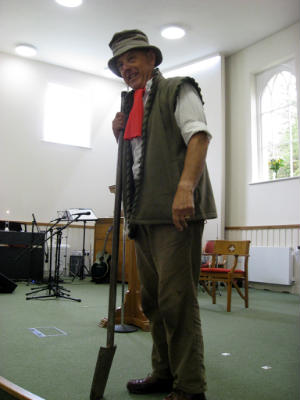